Wear Park Spa Assistant Manager, Tanya Robinson, has had a busy couple of months, ploughing on with her year of challenges, to celebrate her 40th birthday. Since July she has ticked off Snowdon, the cliffs of North Devon, Scarfell Pike and the London Marathon in Devon.

Tanya’s 12 Month Challenge started back in January with the 7 mile Dirty Devil Stampede. Next came February’s 13 mile trail run, the ‘Battle of Woodbury’. Then, just before Covid took over the world, Tanya squeezed in the Totally Muddy 10K.  With her plan for the rest of the year turned on its head, Tanya had to adapt and devise her own challenges equivalent to the organised events she had planned.

Running 70 miles in April, followed by a solo version of the Jurassic Coast Half Marathon in May and 30 miles cycle / run in June, Tanya has managed to keep going, fundraising for the charity which is so close to her heart. Jim, Tanya’s husband, volunteers for them so the charity is a big part of their lives.

July’s challenge started with a 4am wake up call to fog, pouring rain and a delayed start, but Tanya’s Snowdon Scramble got underway as soon as the Welsh weather cleared. Heading up the Pyg route, classed as a medium climb, was tough going. The uphill running up, sudden heat and the air getting thinner left Tanya dizzy and feeling ill, but strangers cheering them on kept them moving forward.

Tanya’s said, “Snowdon can be a cruel mistress and not to take risks we decided to wait and let it clear! (safety first). We made it! Running was hardcore – we combined it with walking and climbing in the steeper sections! It was certainly emotional at times – and definitely one of my harder challenges so far. I can not thank the support team enough – especially my friend Annaka who stayed by my side throughout! Would I do it again? Yeah…I probably would!”

August’s challenge of a 20 tough coastal run from Hartland to Westwood Ho! is a punishing route for the best of trail runners. Over the soaring hills and endless steps, through the mud, brambles and stinging nettles, Tanya reached the destination in one piece despite falling over three times and running into a branch. Tanya said this was the hardest run she has ever completed and couldn’t have done without support from Annaka and Jim. 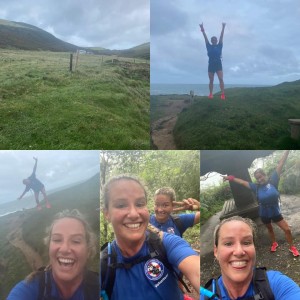 Challenge 9 was Scafell Pike in September. The weather was harsh with high winds and driving rain. Tanya and Annaka (again, supporting her as a running partner) were blasted by the elements with limited visibility of 10 meters ahead. Annaka is an outdoor pursuits specialist who has vast experience of working in such challenging environments, so Tanya was in safe hands. Drenched and cold, and accompanied by a group of friends, laughter kept her going to the top.

Tanya should have been heading to London for the London Marathon in October, but joined the virtual one instead when the live event was cancelled. Once again, the weather wasn’t on her side and her 26.2 mile run from Dawlish to Exmouth was wet and windy. Total determination drove her on, stopping just to get a quick photo at Exeter Golf and Country Club on the way past!

Tanya has so far raised £1,491 – can you help her reach the £2,000 mark by donating whatever you can to this incredible charity?

Devon Freewheelers EVS provides a free out of hours courier service to the NHS across Devon. The service is provided mainly on motorbikes, ridden by volunteers. The Blood Bikes carry whole blood, blood and other medical samples, medication, emergency medical equipment, tissue samples for cross matching before transplant operations and donor breast milk for premature babies.

The charity receives no funding from the NHS for this service and relies on public donations to be able to continue to operate.