Ioan who has been playing squash as a member at Exeter Golf and Country Club since he was 6 years old, was selected to play for Wales in the championship taking place in Dublin from 5th – 7th April.

Ioan helped his team to finish in 4th place, only narrowly missing out on Bronze with a highlight for the Welsh side being a hard fought victory against Scotland.

Ioan’s dad, Men’s Squash Captain, Jon Sharpe said, “I am so proud of Ioan performing for his country team at such a high level and know that it’s a reflection of the huge commitment to junior squash at Exeter Golf and Country Club, particularly by Head Squash Coach, Mike Harris. We are lucky to be members of a squash section which offers such support, expertise and enthusiasm for the game with a passion for developing our younger players. Mike has been a tremendous support for Ioan from a coaching point of view and has put Exeter squash on the map with his efforts across the South West as a whole.”

Ioan has already achieved Welsh Number 1 status in the U11s and U13s and is setting his sights on becoming U15s Number 1 for Wales by Christmas, despite having only just turned 13.

Although it’s the end of the squash season, Ioan’s training continues as he prepares to play for the adults Club Championships and the Men’s PSA tournament, in one of the graded competitions, in June. He has further squash training in Barcelona in the summer.

Find out about Junior Squash 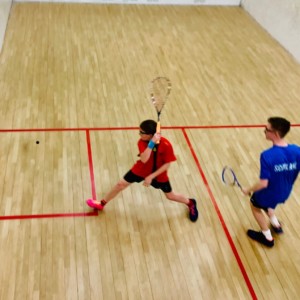