Double win for Exeter at the Palairet and Parker Trophy

On Sunday 3rd June Exeter made their way down to Dartmouth to play Torquay Golf Club in the second round of the Devon Golf Palairet Trophy. Both teams fielded very strong teams and on paper it was impossible to call. Torquay had won the Palairet Trophy twice in the last six years so were strong competitors to come up against.

The day began with the heart-breaking news that long standing member, Past Captain and Palairet team member Tim Harris had sadly passed away the previous day whilst on holiday. The team found out upon their arrival to Dartmouth and the excitement of playing turned to sadness. Tim was an integral part of the team, helping Darren Thorpe with selection and playing in the event for over 30 years. After composing themselves the team prepared for the upcoming match, fired up with the declaration ‘let’s win it for Tim’.

The matches got underway and from the first tee shot until the final putt it was too close to call, and each match could have gone either way. At one point of the back 9 all matches were all square resulting in the pressure rising.

Match 1 saw Harrison Greenberry and Jack Pope all square after 18 holes. This meant the match would need extra holes to find a winner. Luckily the Exeter pair managed to win on the 19th hole to send Exeter into a 1-0 lead. The next three matches were nip and tuck all the way with James Reed and Lewis Beer, Neil Woolfrey and Simon House, George Robinson and Chris Tripp all managing extremely narrow 1up victories to give Exeter an unassailable lead with the final match of Colin Papworth & Jack Jeffery the only match finishing on the 17th hole 2&1.

The match ended with Exeter winning 5-0 and booking a place in the 3rd round against Mortoe & Woolacombe Golf Club at Downes Crediton on Sunday 1st July. Darren Thorpe the team manager commented that the standard of golf played by both teams was the best he had ever witnessed.

The following Sunday, the Parker Trophy Team (the scratch equivalent of the Palairet with 3 pairs) traveled to Honiton to take on Sidmouth Golf Club. Earlier in the week Darren Thorpe organised for the team’s shirts to have ‘TIMBO’ embroided onto the sleeve as a tribute to Tim Harris. 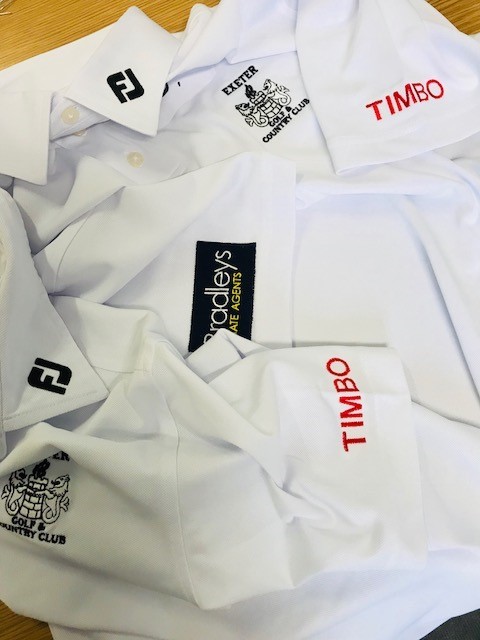 Sidmouth produced a strong team boasting the Devon County Captain Neil Holland and several other low handicapped golfers. Exeter fielded a slightly different team due to several players on County duty with a mix of youth and experience.

Right from the get go, the Exeter players started strong with each match taking commanding leads. No match went the distance and Exeter proved too strong with a fantastic 3-0 victory.

James Reed and Lewis Beer won the top match 6&5, Simon House and Jack Pope followed up with a 6&4 win in match two but the standout performance was Tom Woodhouse and James Delve winning match three 8&6.

Exeter Golf and Country Club will now face either Woodbury Park or Fingle Glen in the next round.