Exeter Golf and Country Club are celebrating the third win of the week by the Men’s Golf Team. Following their progression through to the quarter finals of the Palairet Trophy, the golf team enjoyed two more wins in as many days, when they triumphed at the latest stage of the Parker Trophy and the annual Victory Bowl fixture against Dawlish Warren.

The opening match of the Parker Trophy was a real tussle and became a battle of the short game with some excellent recovery work by both teams. Nothing much between both pairs with the 1 up lead bouncing between either side until Exeter Golf and Country Club made a 5 on the 17th handing Royal North Devon a 2 up win.

Exeter Golf and Country Club started slowly in the second match and after 8 holes were 2 down. Then the players seemed to improve focus with a sparkling display turning the match around. After 13 holes they were 3 up. Royal North Devon tried to come back but Reed and Beer so them off with a 2 & 1 victory.

Match three, was always going to be a tough one. Fred Bishop making his first appearance for the first team, playing alongside the very experienced Jack Pope. Royal North Devon went into an early lead but to the Exeter team’s credit they didn’t panic. With the match score standing at 1 – 1 it all came down to this game but unfortunately Pope was stood on the 17th tee, 1 down. Matters were made worse with the Royal North Devon player booming a great drive up the 17th and Pope managing to block his drive right of the right hand trees. Fortunately Bishop had a small gap to go through and managed to chip back onto the 17th fairway leaving Pope approximately 170 yards to the pin. He then hit a perfect iron shot to 6 feet from the hole. This applied a bit of pressure to the Royal North Devon player especially as the crowd gathered around the green. He then quite unexpectedly pulled his shot left of the green into the rough (even +2 handicappers get nervous). A couple of poor chips resulted in a 5 for Royal North Devon.
“Come on Fred, you can do it” Cool as you like, he slotted his put to take the match down the 18th.

Bishop hit his drive down the left just off the fairway but amongst the trees. The same Royal North Devon player who had pulled his shot on the previous hole stepped onto the tee and proceeded to block his drive to the right completely blocked to the green by overhanging trees. This only allowed his partner to chip into the middle of the fairway and there third shot just managed to hold onto the left hand side of the green approximately 30 feet from the flag.

Pope managed to thread his shot through the trees just short of the green. Bishop then chipped up leaving Pope about 3 feet. Royal North Devon then missed their par putt.

Darren Thorpe said, “The rest is history! A huge well done to the boys! Another great performance and confirmation that this team never gives up!”

The annual home and away fixture with The Warren has been played since 1946 in commemoration of the victory over Japan.
Due to the early season atrocious weather, the Victory Bowl was postponed from it’s usual date in April until a glorious summer evening on 3rd July. The Warren Golf Course was in fine condition and as normal this very keenly contested match was as close as ever.

Exeter Golf and Country Club’s first pair going two down after Chris McGill (Warren) eagled the par 5, 11th. Exeter Golf and Country Club’s men’s team rallied with James Reed’s birdies on 14, 15 & 16 but unfortunately we lost the 17th and halved the 18th for an halved match. Exeter’s second pairing of Max Parsons and Jack Jeffery were as tenacious as ever as the very experienced Warren pairing could not shake them off, even when Max took a blow to his back when one of the group behind drove into him hitting him on the full.

Match three, Exeter Golf and Country Club were up against an Exeter old boy in Ben Sclater, who played some quite wonderful golf and his display of birdie golf was just to strong for us on the night.

Exeter’s Bishop and Walkling were far too strong in match four, Walking finally getting used to his new irons!

Some vintage Pope early play with 3 birdies in the first 4 holes and Parnall then popping up with his own birdie blew away the opposition in the first six holes, finally seeing them off with a 6-5 victory.

In the Captains’ match, which is a separate competition, Exeter Golf and Country Club Captain & Vice Captain have it all to do in the return leg, after being 3 & 2 down at close of play.

Darren Thorpe said, “Thanks to everyone who played last evening, missing out on the England match. We were all in to see the penalties, thankfully, and celebrated the England win and our own double win too!  Well done, let’s keep it going, the treble is still on!” 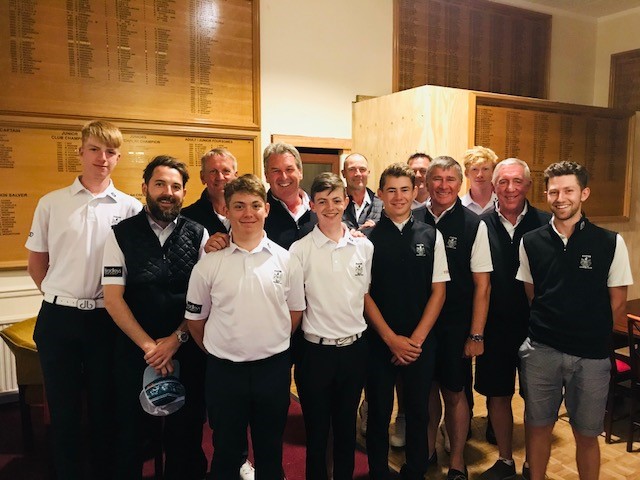