For the second year running, Mike Harris, Squash Pro and Coach at Exeter Golf and Country Club, has been crowned the UK’s number one racketball player after beating the country’s best at the National Racketball Championships.

This year, Mike was joined at the top of the leader-board by Exeter Golf and Country Club Rackets Member, Mike Gregory who came first in the over 45s category after an unbeaten tournament.

Taking place at Edgebaston Priory Squash and Tennis Club on 6th, 7th and 8th July, the Karakal sponsored, National Racketball Championships featured over 180 players coming from all over the UK to compete in the event. The Men’s Open had a draw of 32 players alone.

A number of Exeter Golf and Country Club players travelled to Edgebaston to compete in the Open and Masters Categories.

Mike Harris, Jo Hutchings and Mike Gregory competed in the Open event, while Mike Gregory and Tim Gillingham also took on the Men’s O45’s and O50’s age group events too.

All of the Exeter Golf and Counyry Club players performed really well across the three day competition. However, the outstanding results of the weekend were the two overall wins by Mike Harris and Mike Gregory – bringing home two national titles between them.

Mike Harris took on Number Two Seed, Ted Jeal in the final after a grueling two-hour semi-final match earlier in the day. Mike Gregory faced six matches over the course of the weekend due to competing in the Open Category as well as the over 45s and over 50s.

Chris Jones, General Manager of Exeter Golf and Country Club said, “Having our Club Racketball Number 1 and Number 2 as National Champions just shows how strong Racketball is here – it has just grown so much in the past couple of years, along with squash. A huge congratulations is due to both players – they are an asset to Exeter Golf and Country Club and we are so proud to have Mike Harris here as our coach and Mike Gregory here as such an proactive member.”

Tim Gillingham and Jo Hutchings also performed well. Tim reached the quarter finals of the Men’s O50 only losing to the eventual winner, with Jo Hutchings, reaching the Open Plate Event Quarters, having lost to Mike Gregory in the first round proper too.

For those unsure of the difference between Racketball and Squash, both are played on the same size court with virtually the same rules but with one major change between them. A Racketball is about the size of a tennis ball but still made of rubber similar to a Squash ball. This means that it is much harder to kill the ball and finish the rally. This means matches can last longer than in Squash, making it more of an endurance sport.

To get an idea of what some of the top players can go through in a Racketball match, check out Mike Harris’s Semi Final heart rate and calorie stats below. 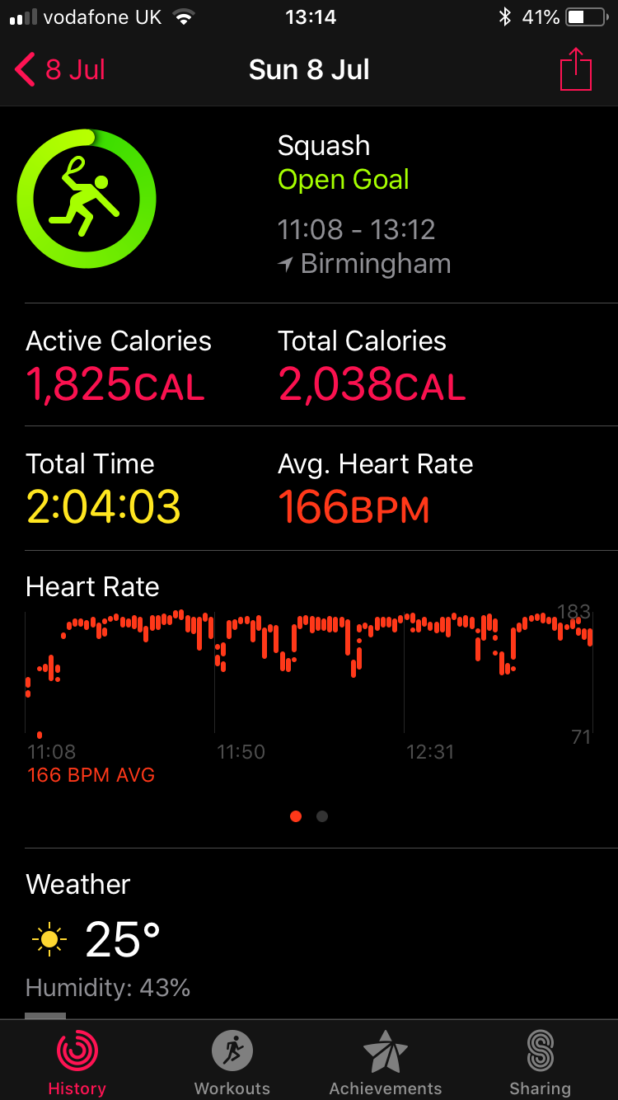 Find out more about joining Exeter Golf and Country as a Rackets Member to play racketball, squash and tennis, plus enjoy swimming in the indoor and outdoor heated swimming pools.