The first Pro Ladies World Ranking event took place at Exeter Golf and Country Club over the weekend of 23rd and 24th March.  Thirteen professional women’s squash players from all over the world, including South Africa and Korea, converged at Exeter Golf and Country Club to battle it out for vital PSA ranking points to further progress themselves up the World Tour standings.

After two days of world-class squash, the number 1 seed, Millie Tomlinson, (world ranked 22) met the number 2 seed, Alice Green (world ranked 130) in the final. Millie’s vast experience at the very highest level of the game told as she soaked up Alice’s aggressive style of squash with some brilliant defensive movement and counter attacking. While Alice threw as much of her impressive attacking shots into the match, Millie stayed very solid and ran out a 3/0 (11/5, 11/5, 11/6 victory, becoming the event’s first ever champion.

Follow this link to the tournament YouTube channel to view some of the matches from the event including the Quarters, Semis and Final.

As well as showcasing the Ladies Professional event during the weekend, Exeter Golf and Country Club  hosted another three competitions running alongside the event, to inspire players across the South West.

Mike Harris said, “These three events ran very well.  With over 120 matches being played across the course of the weekend, it was great to have players of all ages and abilities mixing in with the professionals and having a chance to watch squash at the highest level, while also playing alongside it. Having the Ladies Only Graded competition at the same time proved particularly successful, with all those who took part being inspired to keep competing and indeed bring more female players into the game..something which is greatly needed across UK squash!” 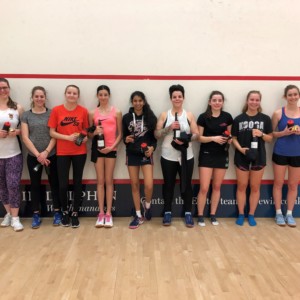 Mike Harris said, “A huge thank you must go out to the sponsors and also the billets who helped support the weekend. Without their help we would not be able to showcase this great game to the level we are managing to do and thanks to them we are being able to inspire players of all standards to push their own Squash forward. Hopefully the example we are setting here with their backing can push other clubs in the area to do the same!”

The next big squash event at Exeter Golf and Country Club takes place on the 28/29/30th June. A Two Day Open Graded Squash Competition will run alongside the 4th successive Men’s PSA Professional World Ranking Tournament at the club.