This time round the Graded had an entry of 45 players from all over the UK, with some travelling down from Birmingham, Wiltshire and even as far as Scotland to compete in the event. The Grades were divided out into 5 categories A-E depending on playing level, A Grade being Semi Professional standard players, all the way down to E Grade which featured players of a club or lower team playing level. The age and experience range of the entrants was really great to see, with the difference being between 14 years – 71 years old across the competitors!

All players in the Graded event played four tightly contested matches over the course of the weekend, with some incredibly close finishes across all of the levels. The high temperatures outside (27 degrees on the Saturday afternoon) led to some very hot playing conditions inside, meaning that the ball bounced more and the rallies were extended for longer than some players were used to. This meant that the tournament t-shirts provided by Karakal UK and sponsored by Charles Stanley came in especially useful given their light material! A full list of the Grade winners can be found at the bottom of this article, but it was great to see the honors spread around players from all clubs and counties.

The Men’s Professional event (in its 4th year of running now,) featured some of the top British and European Squash players, alongside other competitors from all over the world. Some even travelling from Pakistan and the USA to compete in the tournament. As always, these events are vital for players looking to progress up the world rankings, where winning through each round in the event can allow you to gain more ranking points to help your climb to the top.

There were some really long and brutal matches throughout the Pro event, once again partially due to the hot court conditions combining with the retrieval abilities and physical capabilities of the top guys. Most notable was the first round match between 5/8 seed James Wyatt (world ranked 323) who took 100 mins to get past Lewis Walters (world ranked 512) 15/13 in the 5th game! Another tough battle was the semi final encounter between 2 seed Robbie Downer (world 128) and 3/4 seed Miles Jenkins (world 180), ending up with Robbie winning 3/1 in 65 minutes.

The title was taken by Welsh Number 2 and event seed number 1 Peter Creed (world 66), who took out Robbie Downer 3/0 in the final in a very entertaining and fast paced 45 minute match. The crowd of EGCC members and tournament players were treated to a great match of explosive retrieving and shot making from both players, plus an entertaining bit of banter between Downer and the referee at times. (Perhaps a chance for Downer to get a breather in between the shootout style gameplay?!) In the end Creed’s consistent quality of length and width hitting coupled with his lightning counter-attacks proved to be too much for his opponent, demonstrating the type of brilliant play that has kept him in the top 60/70 in the world for a number of years.

This marks the third year in a row that a non-English player has won the Pro event, with previous victors coming from Wales and Scotland. Perhaps next time an English professional can steal the win?

Mike Harris, Squash Professional at Exeter Golf and Country Club said, “All in all it was a great weekend of Squash with over 110 matches being played across the two days. Plans are already being made for next year to hopefully make the tournament bigger and better than before.”

“A huge thank you must go to our Professional Tournament sponsors, without who’s financial contributions toward the prize money pot we would not be able to host such fantastic Squash players. Your contributions are helping to inspire Exeter and Devon’s Junior and Adult players alike by helping to provide some amazing Squash to watch.” 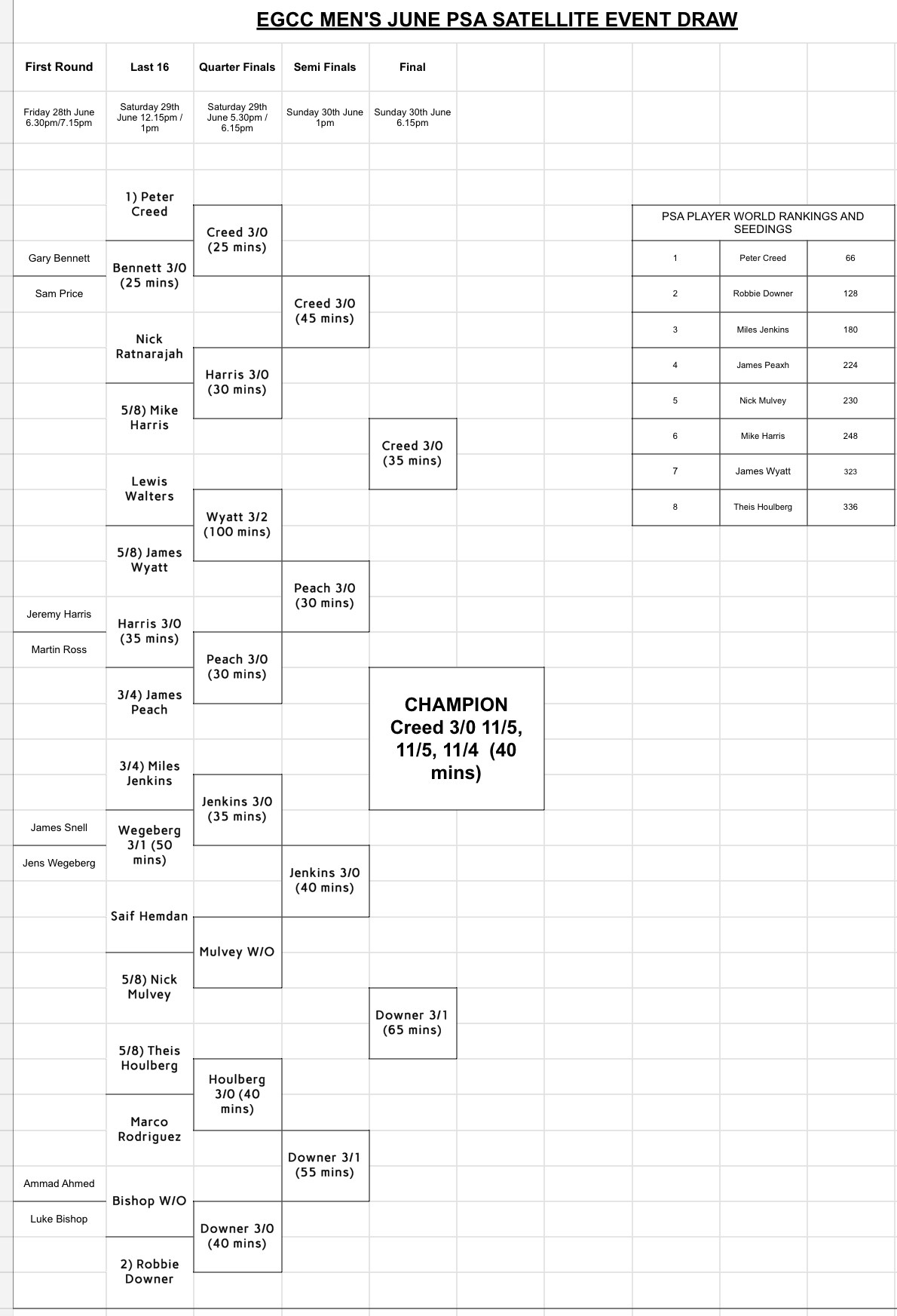 Thanks to the below businesses:

And to club members

Find out about playing squash at Exeter Golf and Country Club